One of the best things about researching individual whales is that, no matter how long we study them, we keep being reminded of how much more there is to learn…

In 2011, MERS researchers observed a humpback whale named “Conger” (BCY0728), a whale that we have documented off northeastern Vancouver Island since 2009, doing something that we had never seen a humpback do before. Conger was remaining at the water’s surface with his mouth wide open, and he stayed like this for an extended period of time. 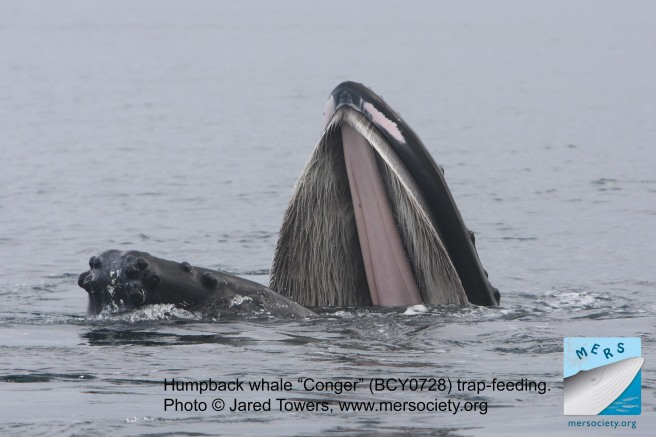 With his mouth open, he spun slowly in place for about a minute, and then used his flippers to push fish toward his mouth! 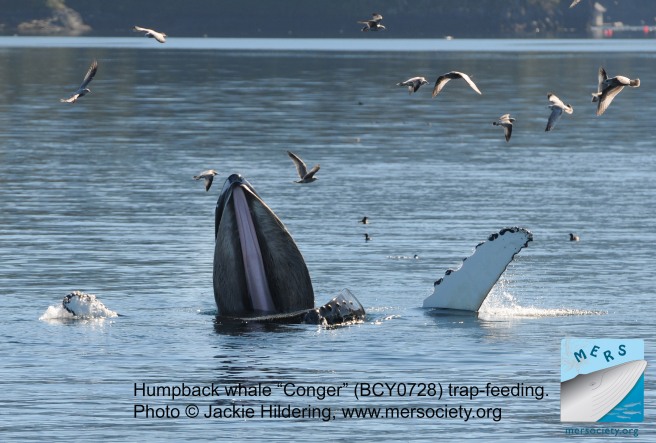 After observing this feeding behaviour several more times, we named it “trap-feeding”, because it reminded us of the way that Venus flytraps catch flies. Humpbacks were remaining stationary and waiting for prey to enter their mouths. By studying the behaviour further, we have learned that, in addition to often using their long flippers to direct fish toward their mouths, humpbacks also benefit from diving birds that are chasing the same prey. While trying to escape the birds, the small fish appear to school in or next to the whales’ mouths.

We know of only two whales who used this trap-feeding behaviour in 2011 –  Conger and “Moonstar” (BCY0768), who was three years old at the time. But by the end of 2015, sixteen of the humpback whales that feed off northeastern Vancouver Island had been documented using this strategy at least once. In some cases, humpbacks even trap-fed side-by-side! 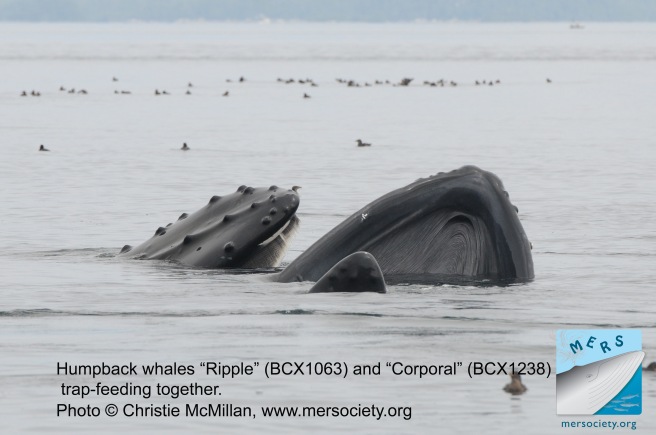 Aided by the many people that have contributed photos, videos, and sightings of trap-feeding over the past six years, MERS researchers have concluded that when whales trap-feed, they are feeding in the same locations and on the same prey species (juvenile herring) as when they lunge-feed. BUT there is a big difference in the size and density of the schools of fish that humpbacks consume when they trap-feed vs. when they lunge-feed… 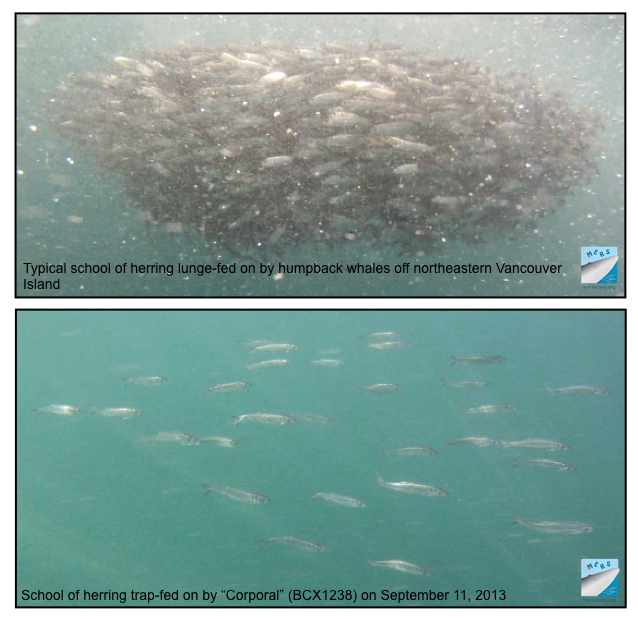 The schools of herring that humpback whales trap-feed on are much smaller and less dense than the schools that they lunge-feed on.  We believe that trap-feeding is an energetically efficient way to feed on these smaller schools of fish. When whales are lunge-feeding, they accelerate toward their prey, then open their mouths – an energy-intensive strategy that only makes sense if schools of fish are large and dense enough to result in a net energy gain for whales.  But while trap-feeding, whales open their mouths while stationary or near-stationary, and therefore use much less energy.

If you see humpback whales exhibiting this feeding behaviour, we would love to know! Sightings and photos can be sent to info@mersociety.org

Additionally, MERS researchers are in the process of publishing a study focused on trap-feeding – so a lot more information about this new humpback whale feeding strategy will be available soon!

We are a non-profit organization dedication to promoting conservation and understanding of marine ecosystems through scientific research and environmental education. View all posts by MERS